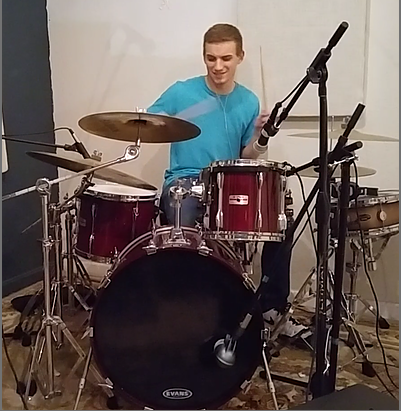 Michael was born in San Francisco and raised in Pleasanton, California. Even in his old home videos, it is evident that Michael has always been enthusiastic about music. His parents raised him on classic rock, but as he has grown older, he has diversified his tastes and skills on drums to fit all genres and styles. He began playing drums in his fifth grade year, which gives him about eight years of experience.

His formative years, under various instructors, focused on methods of playing the snare drum. Following that, he began formal education with John Mader (Steve Miller, The Lion King, Hamilton), which furthered his technique and musical diversity on the drum set, and allowed him to speak more fluently through his music. To Michael, drumming is an extension of himself; he views it as an art, and as such, in teaching, he does whatever he can to transfer this spirit to the students.

Michael is studying International Business and Spanish at San Francisco State University, and he is working on multiple studio recording projects with other musicians at the university and in the Bay Area. He has played many shows in the Bay Area with local bands, and has produced recordings for his bands as well as those of his colleagues. He is also an amateur guitarist and bassist.